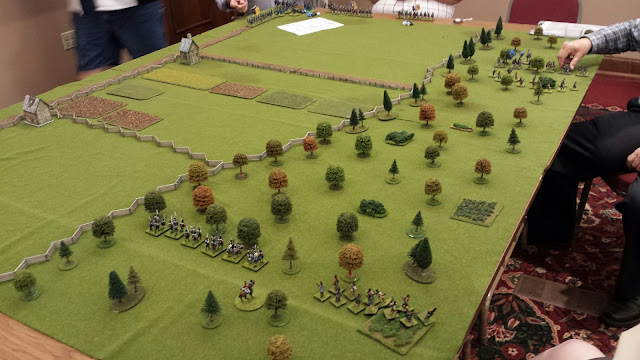 This was the battle which sparked my interest in the War of 1812.  We visited the battlefield in 1985 and I have wanted to recreate this battle on the table top since.  It has simple terrain, balanced equal forces and colorful uniform.  British regulars, gray jackets Americans, volunteers in mixed dress and native Indians.  You would have a difficult time finding a more perfect battle to fight in miniature.


For this battle I used the maps out of Richard Feltoe's book, Tides of War.  To fit the battlefield on a six foot by eight foot table I divided the field in half to represent the plain and the woods.  Fences outlined the woods and defined the roads.  This way I could place trees in the wooded area but players could move the trees to not interfere with troop movement.   I did not include either river.  Instead both sides had to enter the table on the road in road column.  Light troops for both sides were already deployed in the woods.  Historically I should have had the players in the woods fight for three or more turns before the regulars entered the table.  But I did not  want players just hanging around doing nothing  ( no fun there).  So for the first couple turns players commanding the regulars entered the table and deployed while the light troops fought it out in the woods.

During this time the regulars of both sides marched up the road and onto the field.  Although both sides advanced with the cavalry leading, the Americans brought their infantry up fast while the British made sure their artillery was to the front. 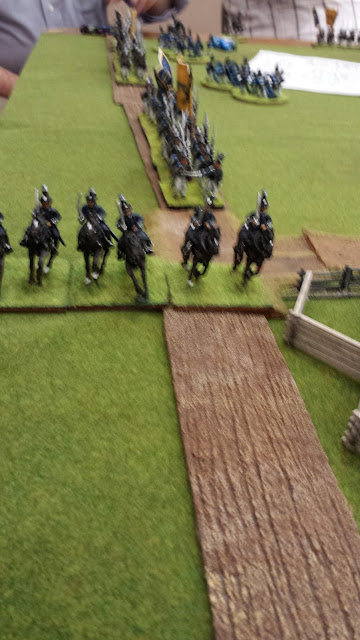 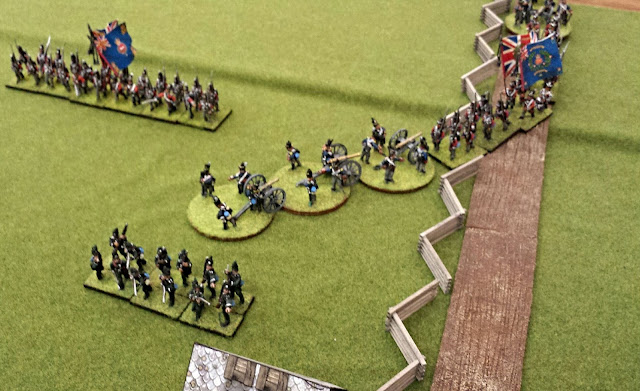 charged.  A good war gamer cannot do otherwise.  Although the melee was inconclusive, the American morale broke and they

scampered back.  The victorious 19th Light Dragons held the field and covered the royal artillery. 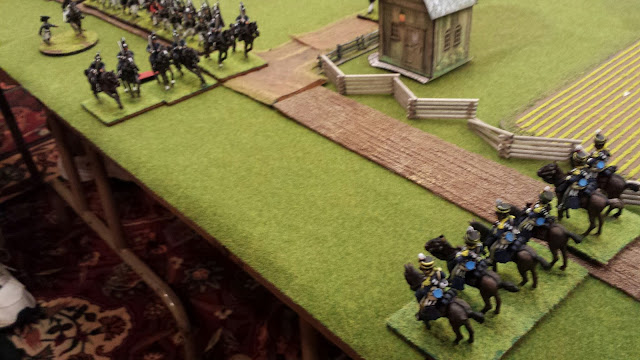 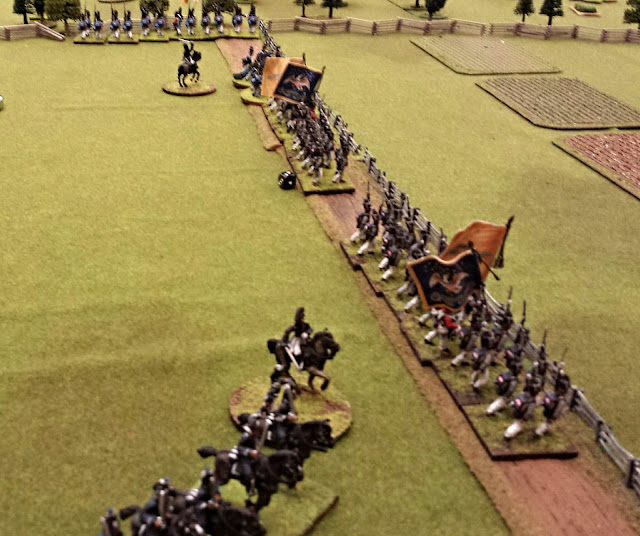 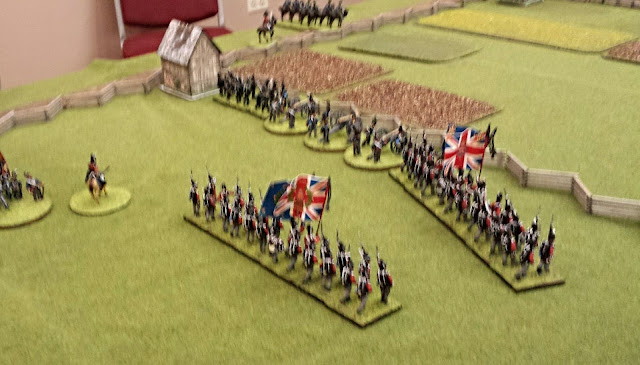 In the woods the great melee was coming to a head.  The American Indians forced their British counterparts to fail morale and retire shaken.  But the Lincoln militia forced the Pennsylvania Volunteers back also.  The American Indians raced behind the Lincoln's to attack them from the rear but the British Indians had recovered their morale and attacked them in their rear  and routed them in turn! The Lincoln Militia marched on chasing the Pennsylvania volunteer off the boards! 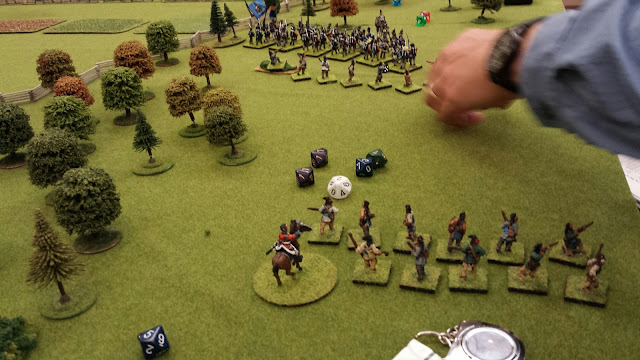 On the plain, the British commander massed three gun sections and commenced target practice on the U.S. 9/21st Regiment.  The American commander could only reply with two gun sections, the other guns were masked by his cavalry. 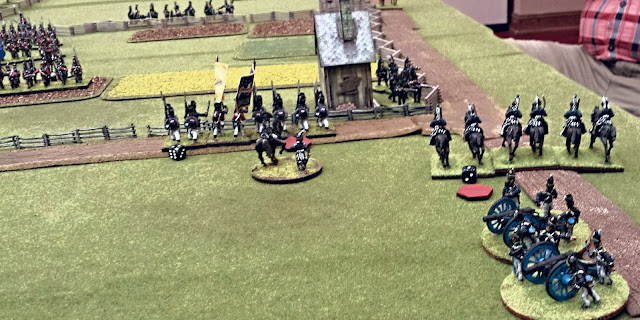 Seeing the 9/21st being shot to pieces the British commander advanced his light companies in skirmish order against him supported by the 19th Light Dragoons.  This must have been the moment the American Artillery commander waited for.  He unmasked his guns and unloaded a devastating round against the dragoons which decimated them.  The American dragoons charged the skirmishes.  Although the skirmishes were shaken, they in turn caused the dragoons to fail their morale which tumbled them back. 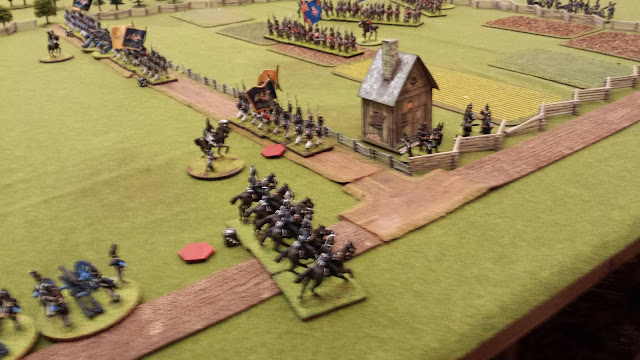 The 9/21st failed their morale in the face of the British advance and retired off the board. 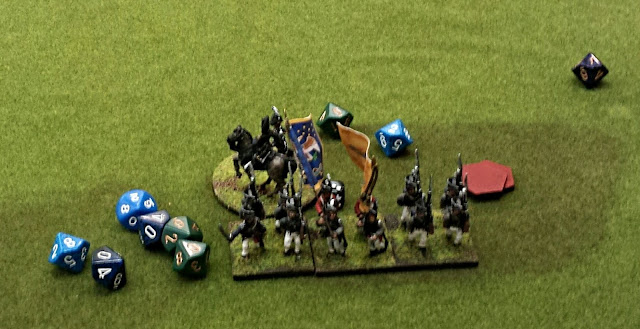 By this time the Lincoln Militia and Indians in the woods were positioning themselves on the flank of the American line.

The British line advanced against the Americans, who now have a major gap in their line and are facing enemies on three sides. 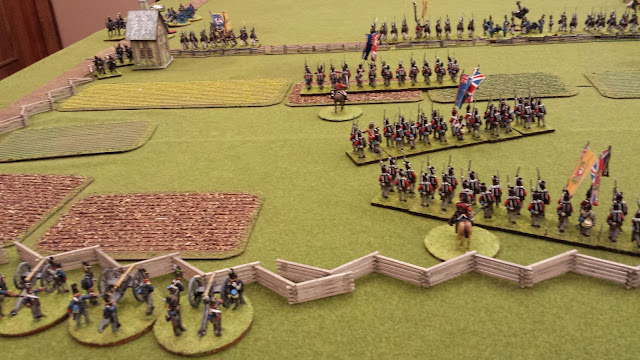 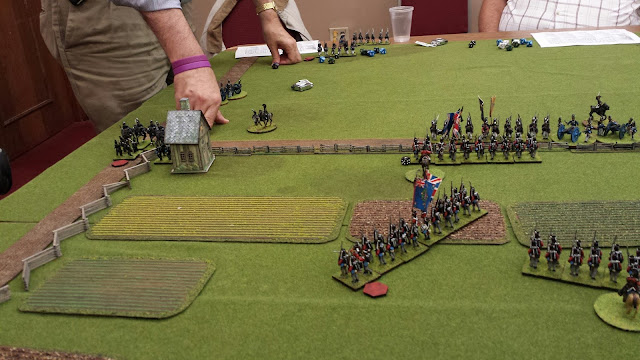 At this point, with the full weight of the British line on them, and the Lincoln's in position to out flank them we called the game.  It was a British victory and future cadets at West point would wear anything but gray!

All felt it was a fun and balanced game and would enjoy replaying it.  Perhaps I have found my "go to" scenario for War of 1812?

In the future a couple things to improve the game.  I plan on buying more trees to make the woods look better.  Also I am working on better buildings.  I will add rivers and bridges to both ends to make both sides remember their escape (should things go wrong) is a small bridge.