To command my Crown Forces army here is the command figure of Sir William Howe.  It is a beautiful figure from Fife and Drum miniatures.

To go with Howe I have painted a figure of a lady in a  riding habit to represent Mrs Loring.  I thought it would be fun to add her to a command stand vignette.  Perhaps a couple of General or staff officers trying to get orders from a distracted  General Howe.  We will see how it comes out! 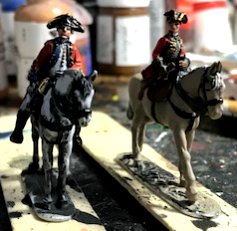 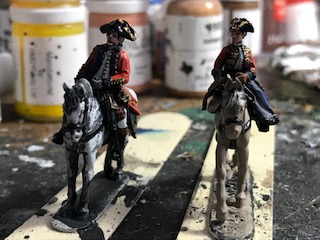 Some more command figures for the Crown Forces.  Here is the figure of Earl Cornwallis and also two other General officers.  Outstanding figures from Fife and Drum Miniatures.


Here is the figure of Cornwallis.  It actually looks remarkably like his paintings!  In my games he will be either commanding his southern army or the "elite wing" (Guards, Grenadiers and Light Infantry) of Howe's army. 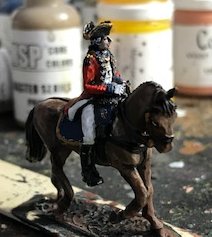 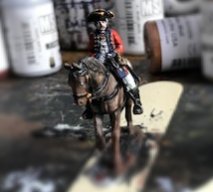 Next are two generic mounted officers.  These will be used in command vignettes. 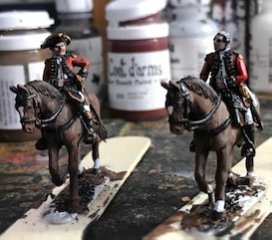 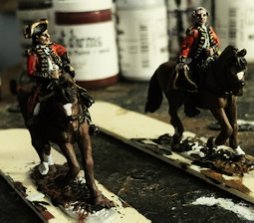 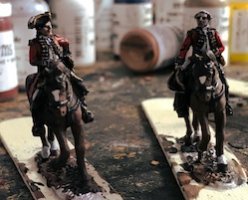 
Working on some command stands for my American Revolution War armies.  Fife and Drum miniatures have released some excellent command figures including figures of Washington, Greene, Howe and Cornwallis. I am most excited as these four are some of my favorite commanders during this period. 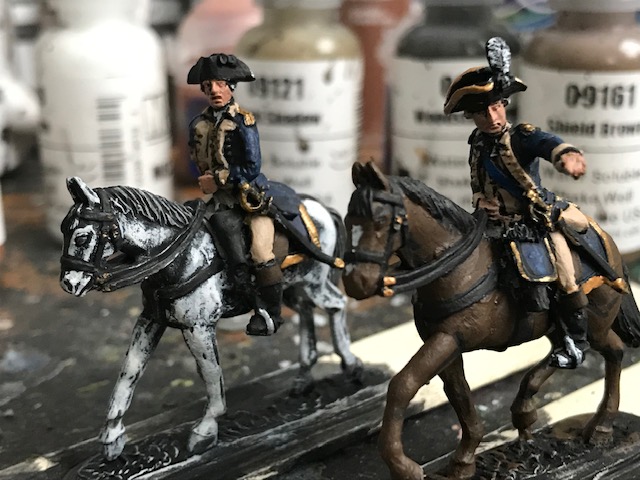 For higher level command stands I am going with two figures per division level stand. So both Greene and Cornwallis will will have a ADC staff figure on their stand.  Washington will have a extra officer and a trooper with his command flag in a nice vignette.  Howe will have something similar. 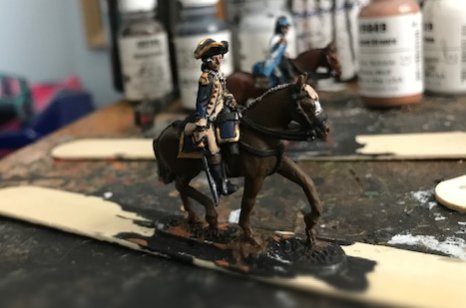 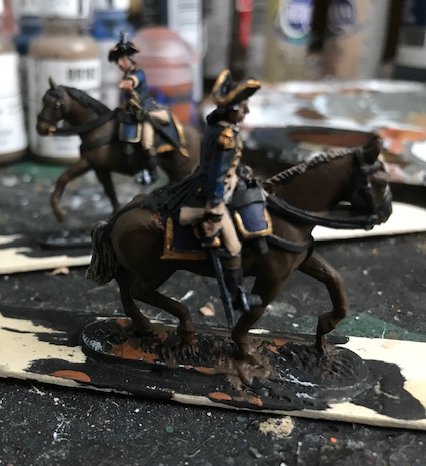 Right now I am painting away in American figures.  In the work bench are Greene, two mounted officers and a trooper of the 3rd continental light dragoons.  These are beautiful figures that are fun to paint.
Posted by Mark Nichipor at 10:45:00 AM 1 comment: Links to this post

Gettysburg in Miniature: A Battle Overview Illustrated With Model Soldiers and Dioramas 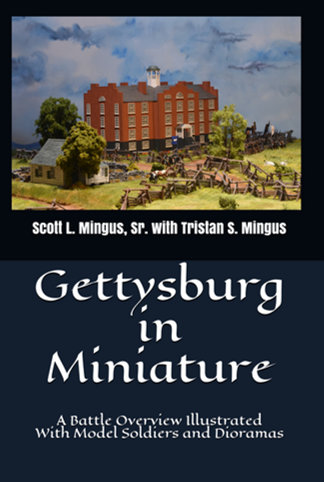 Recently while looking through books on the American Civil War on Amazon I came across the title "Gettysburg in Miniature: A Battle Overview Illustrated With Model Soldiers and Dioramas. "  Unfortunately there was no picture of the book cover but reading the reviews suggested to me this might be worthwhile.  At under $3 for the kindle version down load it was a bargin.  I am very glad I did.  Once downloaded I could not put it down and finished it in one reading.

I am not a big Civil War buff. I have read widely through the literature, walked numerous battlefields and had many late night discussions with fellow Park Service Rangers stationed at NPS sites.  But for some reason the bug has not bitten me.  So please keep this in mind while reading my review.

The text is a standard account of the Battle of Gettysburg.  It follows the usual narratives but is written in a clear, understandable manner.  From the author's blog he has said it was written for teens to get them interested in the battle and the Civil War.  I am sure it will;  it held my attention.

But the glory of the book are the pictures.  Illustrated profusely with photos of Civil War miniatures.  These include 54mm, 40mm, 25mm, and 15mm figures.  Collector figures, War game tables and dioramas fill the pages.  It is reminiscent of the book "The Wargame" edited by Peter Young.  And just as that book filled my imagination and still delights me today so too does this book.  A minor criticism of the book in Amazon reviews are that the pictures are in black and white rather then color.  The author says on his blog this was done to keep the cost low to make it attractive price wise to parents buying the book for teens or younger.  He also hints that they might later release a color edition of the book in the future.  While I am happy with the book as is, I would buy a color version of it if it came available.  But I am happy with the black and white pictures as they add to the period feel of the book.  They give me a nostalgic feeling of rereading a Featherstone book or looking at The old New England Wargamers magazine "The Courier."

The combination of interesting text and miniature soldiers makes this a wonderful addition to anyone's library.  Many of the war game tables illustrated in the book should inspire one to refight that phase of the battle (either in the ACW  or as a hidden scenario) or improve your tabletop set up. This is a winning  combination and I am surprised more books like this have not been done.  I would highly recommend it.  In fact I have dropped a hint to my daughter and son this would be a great fathers day or any other time gift! It has already gotten me pondering how to fight the first days battle has an American Revolution action, or the wheatfield as a War of 1812 battle!

If you are interested in this book here is the page on Amazon for it;
https://www.amazon.com/Gettysburg-Miniature-Overview-Illustrated-Soldiers-ebook/dp/B07QT7TV89/ref=cm_cr_arp_d_product_top?ie=UTF8