Getting started in the War of 1812

The War of 1812 is a fascinating period and provides great opportunity for miniature war gamers.  The armies are perfect for table top battles.  They are colorful and offer a wide variety of Uniforms and troop types.  In addition due to the recent anniversary there is a abundance of materials out there.  I just (nearly finnished) my Niagara 1814 project and am branching out adding more colorful regiments.  If you are interested in gaming this conflict here is a short guide to help get you started. 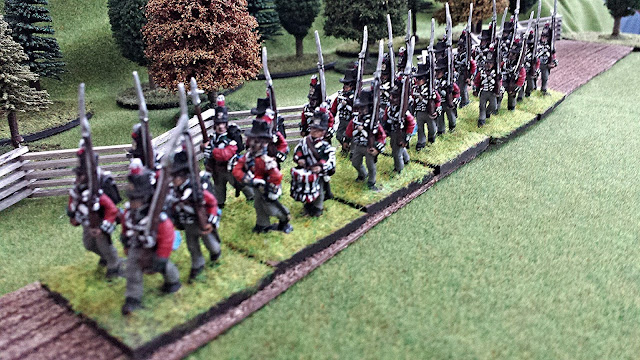 Uniform guides:
When staring the period I found these guides to be very helpful.  They are moderately priced and avalible from On Military Matters.  They provide the basic material you need for organization and uniforms.

If you get into the period and want more these two books are the definitive uniform bibles.  Outstanding!

Chartrand, Rene A MOST WARLIKE APPEARANCE: Uniforms, Flags and Equipment of the United States in the War of 1812

Chartrand, Rene A SCARLET COAT: Uniforms, Flags and Equipment of the British Forces in the War of 1812

Books:
Berton, Pierre.  Flames Across the Border: 1813-1814
Volume 2 in his general history of he war.  A very evan handed popular history. He has a great number of characters he follows throughout the war.  If your looking for a military history this is not it.  But it grabs your attention and holds your interest.  One of the two books that got me interested in this strange conflict.

Eshelman,  Ralph E.  In Full Glory Reflected: Discovering the War of 1812 in the Chesapeake .
More of a coffee table book.  But the illustrations by Gerry Embelton are outstanding.  Great for inspiration.

Feltoe, Richard.  Redcoated Ploughboys: The Volunteer Battalion of Incorporated Militia of Upper Canada, 1813–1815
Great regimental history of one of my all time favourite regiments.

Graves, Donald E.  Where Right and Glory Lead! The Battle of Lundy's Lane, 1814
Again, a great fan of the author.  Great military history studies of these battles but a top notch historian.

Lord, Walter.  The Dawn's Early Light.
The other book that got me interested in the ad or 1812.  Covers the Bladensburg/Baltimore campaigne.  Again more of a popular history.  I am a huge Walter Lord fan, and enjoyed this very much.

Malcomson, Richard.  A Very Brilliant Affair: The Battle of Queenstown Heights, 1812
Brilliant history of this battle.


Miniatures:
Before starting your collection I would recommend picking a year.  This is because American regular uniforms differed greatly from early war to mid war to late war.  While I might mix mid and late war I would not recommend mixing early war.  The British and Canadian units had some differences by year but not as much.

I would highly recommend these two figures lines.  The majority of my collection is from Knuckleduster miniatures.  They are very reasonably priced and cover the entire war in all its uniform variations.  all pictures on this article are Knuckleduster miniatures.  The  Brigade Miniatures fit in very nicely with Knuckleduster.  They are very well sculpted and detailed.  As of now they have figures for  1814.  In addition Old Glory miniatures has a fine of figures for the conflict with some specialty figures no one else has (including President Madison).

http://www.knuckleduster.com/shop/
(Look under free down loads.  Forrest provides great unit guides on how to build your regiments)
http://brigadegames.3dcartstores.com/War-of-1812_c_450.html


Blogs:
These blogs have inspired me and provided great assistance in starting my own collection.

Rod has been my mentor and guru for all things War of 1812:
http://warof1812war-gaming.blogspot.com

Rules:
I will not give out any suggestion on rules.   Each table top gamer has his or her idea of what makes a good rule set and what they like to play . For me, I have settled on my Mr Madison Mets Fife and Drum.  These are the rules for Rev War found  on the Fife and Drum miniatures site.  I have made a few twists and turns to them.  They provide a fun, fast and old school type game which I dearly enjoy.  My Advice is find a set of rules which mirror your tastes and use them. 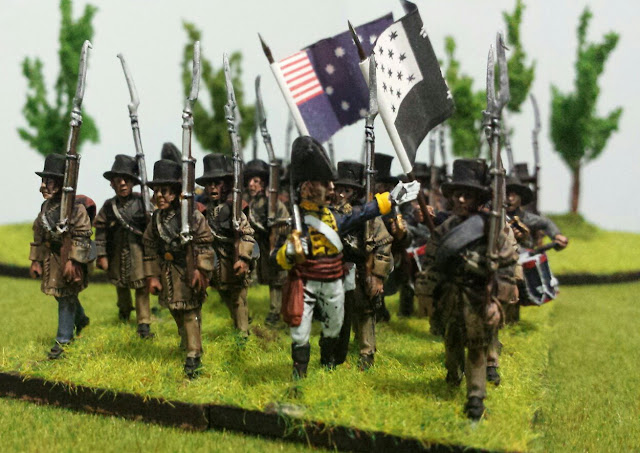 Email ThisBlogThis!Share to TwitterShare to FacebookShare to Pinterest
Labels: War of 1812