For most of General Sir William Howe's campaigns the Grenadier and Light Infantry battalions were his one two punch. These battalions were formed by taking Seattle light infantry and Grenadier companies from their parent regiments and forming them into combined battalions.  They were usually his spear head for most attacks in most battles.

The Light Infantry companies were the new boys in the British establishment.  During the Seven Years War (French and Indian war in North America) it became the custom to form skirmish companies or light infantry companies in each regiment.  This became official in 1770.  These companies were often distinguished by their dress (black or tan belting, caps, red waistcoat and short regimental coat). Because of poor discipline and training William Howe was ordered to set up a training camp for light infantry in 1774.  The results were Howe's Light Infantry discipline and a standard trading requim for the Light Infantry.  Howe used this to train his entire army in 1776 while in Halifax prior to the invasion of New York.

During this time the Light Infantry adopted the uniform they would wear during the Rev War.  Black belting and equipment, a short sleeved waistcoat and gaitered trousers or overalls.  As the entire army was going with a slouch hat so too did the Light infantry.  The Light Infantry were formed into three battalions starts start of the 1776 campaign.  After the invasion of Rhode Island the third battalion was broken up and combined into the remain two battalions.

The second Light Infantry battalion was made up by the following companies: 40th (buff), 43rd (white), 44th (yellow), 45th (green), 49th (green), 52nd (buff), 55th (green), 63rd (green) and 64th (black).  For gaming purposes I use 30 figures per battalion with six figures per base.  So I organized them by facing color with one stand buff, two stands green, one of yellow and one of black.  It would have worked out better with six stands but we cannot have everything.

Once in the table I have a very nice command of two Light Infatry battalions to fight alongside their "big brothers" in the Grenadier battalions . 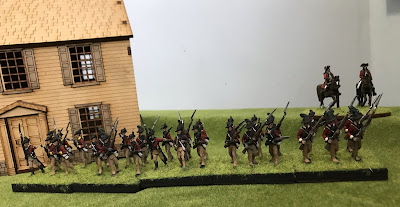 Figures are from Fife and Drum miniatures and represents the British Light Infantry campaign uniform for 1776-77.  Slouched hats, short jackets and overalls, and black equipment.  Uniform is based on both orderly books and the famous DelDe Garta paintings of the fighting at the Chew House at Germantown in October 1777.  These are really beautiful figures and a joy to paint.  Jim is one of the very few manufacturers who do this uniform and it is a credit to him to provide them to us Rev War buffs.  Great fugures!
Posted by Mark Nichipor at 8:32:00 AM