Although busy with regular life after vacation I have managed to work some Painting in.  The Light Infantry battalion is finished and needs to have its based painted and grass added.  The Grenadier battalion is coming along very nicely.  With snow in the forecast this weekend I should be able to finish it up. 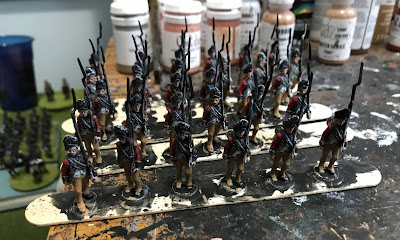 For Christmas time I got a number of miniatures.  These are American Rev War figures from Old Glory and Brigade games. About a brigade's worth ( Four battalions of thirty figures each) from both  companies.  The brigade figures are brand new from their kickstarter and the Old Glory are from their second edition.

Old Glory figures are American continental line.  They come in bags of  38 figures with command figures (officers, standardbearers, drummers and NCO included).  Uniforms are the regulation coat or hunting shirt.  I have bags of the line in cocked hats, slouch hats and hunting shirts.  these should produce four slightly different regiments.  If you have a Old Glory Army card these figures are very affordable. 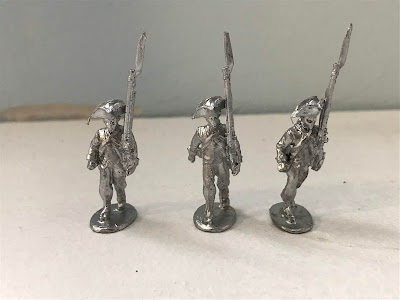 Brigade Games has Continental line in uniform as well as militia in the bounty coats offered by the Massachusetts Provincial Congress in 1775.  When I was at Minute Man NHP I worked with Henry Cooke to have some of these coats made for the park.  They were a short working man's jacket with false cuffs and no lapels with regimental buttons.  A very comfortable and practical garment.  I had to get some of these!  They have a nice variety of mixed hats and equipment in each figure to give you regiments a slightly non regulation look. 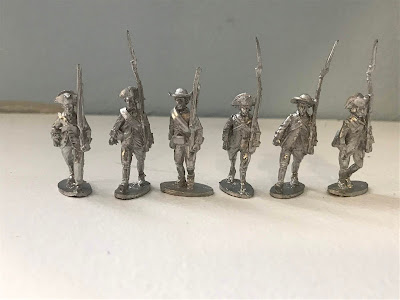