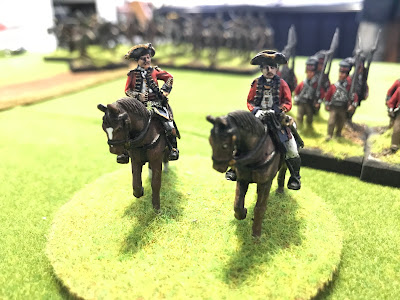 The Battle of Camden 16 August 1780 was a lopsided British victory.  It marked the high point of British success in the south and possibly caused Cornwallis to under estimate his opponent in the future.  Because of the terrain it was a line them up and march forward type battle. Tactically not very interesting.   Because of these reasons I have avoided the battle on the table top.  But, can I be a serious Rev War gamer and not fight this battle? Besides I have a project for this year to refight two campaigns in the southern theater for the Rev War.  So, here I am with this recreation of the battle today.

The set up:  The battlefield was open with scattered trees. These did not effect movement or musket/artillery fire historically so they will not in this re fight.  Due to the poor visibility that morning (A heavy mist)  both sides had set up close to each other.  I placed the lines about 20" apart.  Due to the swamps on both flanks this is a frontal fight with no manovering.  Both sides have set up historically.  Both sides have placed their best regiments on their right flank.  Unfortunately this means the British elite regiments are against poor quality militia.  The Continental line regiments of Maryland and Delaware are opposed by veteran loyalist regiments.  Although the Americans outnumber the British heavily the numbers are off set by the superior quality of the British regiments.  Now onto the game.

British advance against the American line. Artillery fire causes one militia regiment to rout.  Units to either side check and one regiment in second line is nervous but holds.  Brigade commanders are busy holding their men together.

Webster's brigade advances into musket range.  A devastating volley turns the militia line into ruin and regiments break and retreat.

On the opposite flank the 2nd Maryland brigade advances against the Loyalist line.  Both sides exchange volley fire and both sides stand steady. 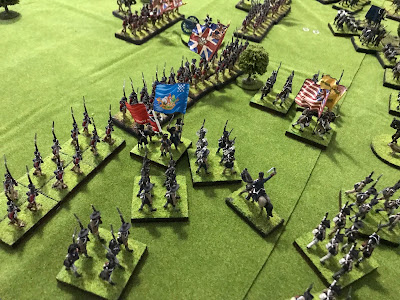 At this point following a close range volley from Webster's brigade the militia line collapsed.  All American Militia regiments are either all retreating or routed.  The British commander now charges forward into this mess and completes the rout of the American left flank.

Seeing this Gates quickly moves the 1st Maryland brigade to cover his exposed flank.  One militia regiment holds, but for how long?. 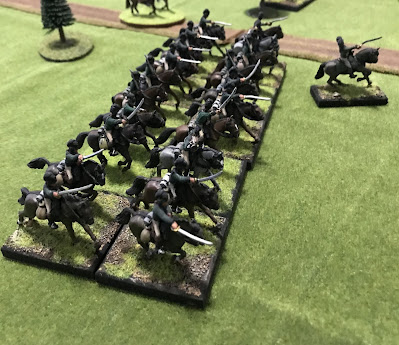 Tarleton, moves the Legion cavalry forward getting ready for a decisive charge.

Next up The Continental line stands fast. 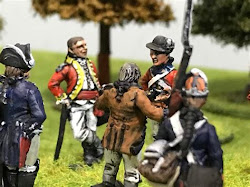